If you aren’t familiar with Sylvan Island, it is host to some of the most unique mountain biking and hiking trails in the Quad Cities area.  I’d even hazard a guess it's unique in this respect at the national level.  A non-intersecting loop of 4 miles could be stitching together from the maze like network of trails on the island.  These trails pass through a variety of distinctive terrain and man made features.  A few notable examples being: industrial rubble, grasslands, a section of brick road, lowland forests, piles of slag, river shoreline, and numerous concrete loading docks.  The island has a strong industrial history. From around 1900 until 1956 it was the site of the Republic Steel mill which supplied steel/iron to local industry. Many foundations and structures from the mill still exist today and bring a lot of character to the area.  Sylvan was also the site of a small limestone quarry and an ice harvesting operation before the dawn of refrigeration.  Relics of the island’s industrial heritage, return of forest and wildlife, and the trails that bring these elements together are what make Sylvan Island such an appealing public space. 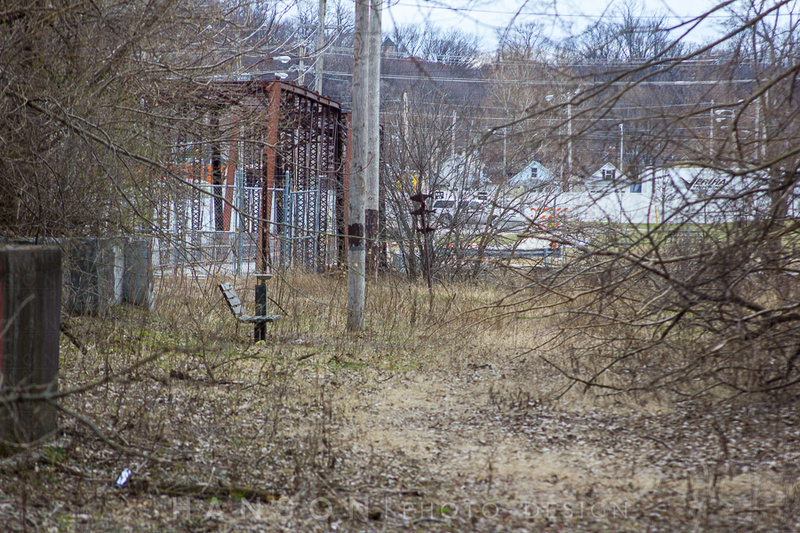 The main limestone paths on Sylvan Island are disappearing from lack of maintenance and use. Closed pedestrian bridge in the background.

Next month will mark the third anniversary of the pedestrian bridge closure which provided the only public point of access to the island.  While the island itself remains open to the public, the lack of a functional bridge has effectively closed the island to a majority of its previous users.  The +100 year old bridge was closed in April 2013 after concerns about its structural integrity came to light after an inspection.  I posted a previous blog entry about the island back in Aug. 2013 showing the island in a similar overgrown, albeit much greener, state.  Not much has changed in those three years, but here is an overview of the current state of the island (with plenty of photos). Click here to view the whole gallery. Photos are captioned for more info as well. 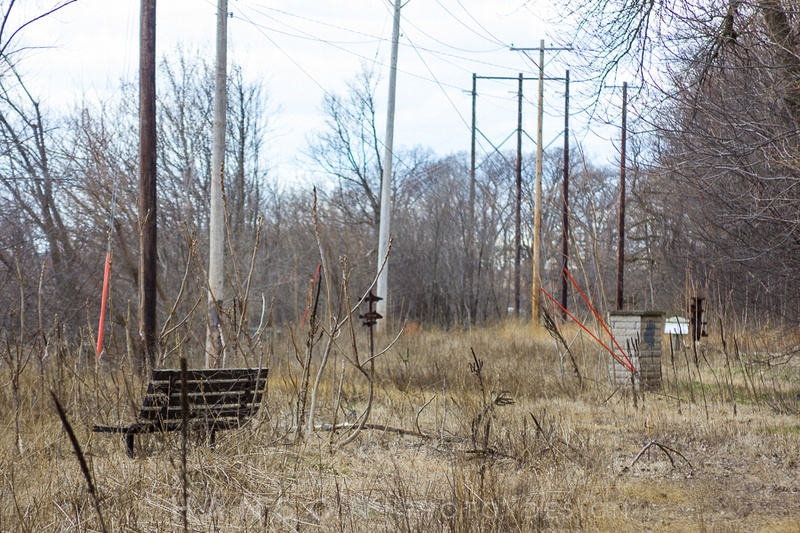 Woody plants starting to invade the previously mowed entry to the island.

We started on the northeast shore and gained access via boat near the hydroelectric dam. Walking around the island and zigzagging between crushed limestone paths and singletrack trails we managed to cover a good chunk of the property.  Overall, people, a very very small number, still seem to be using the island. However, perhaps not in the intended way. 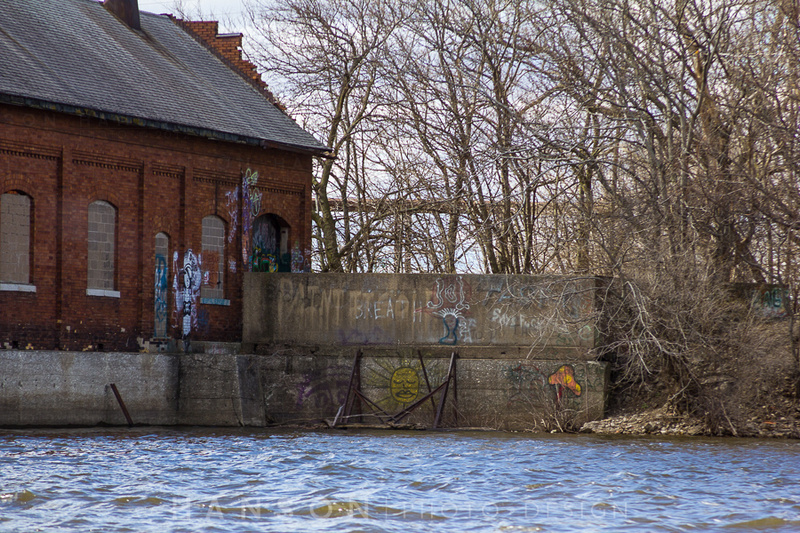 Approaching the island from the east (upriver) side.

Under the power transmission tower on the northeast corner of the island were significant amounts of new garbage.  This area appears to see the most visitors to the island.  A couple abandoned tents, sleeping bags, and blankets were scattered around the space and slowly being covered by leaves.  An interesting log sun shade(?) was stacked onto one leg of the tower and large logs were arranged on the ground as benches for seating.  The usual fire ring was directly under the tower but hadn’t housed a fire recently. 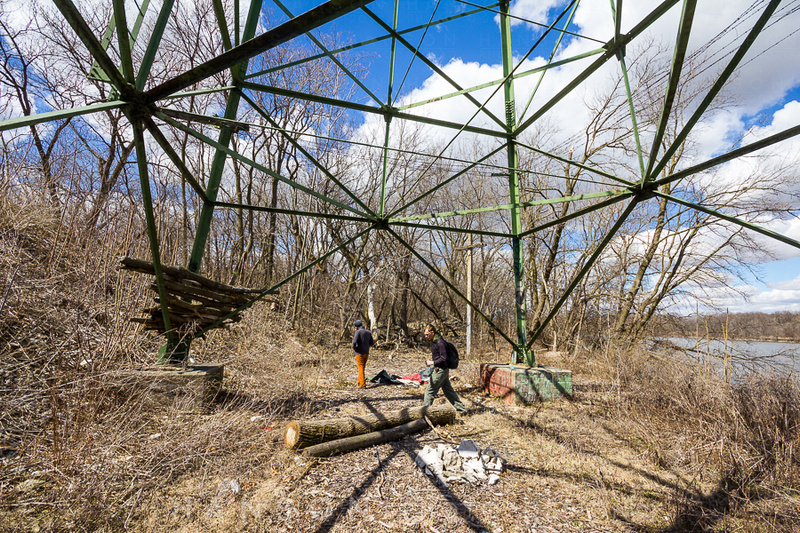 We stumbled into a temporary camp near the hog trough ruins just west of the central limestone path/loading docks.  A very primitive setup: simple camouflage tarp canopy, bedroll neatly tucked underneath, and a pile of grass for a sleeping mat.  Like any proper campsite, a small stack of firewood and a still smoldering pile of coals were just a few feet away. Nobody was home though. It looked like the site had been occupied for at least a few days. 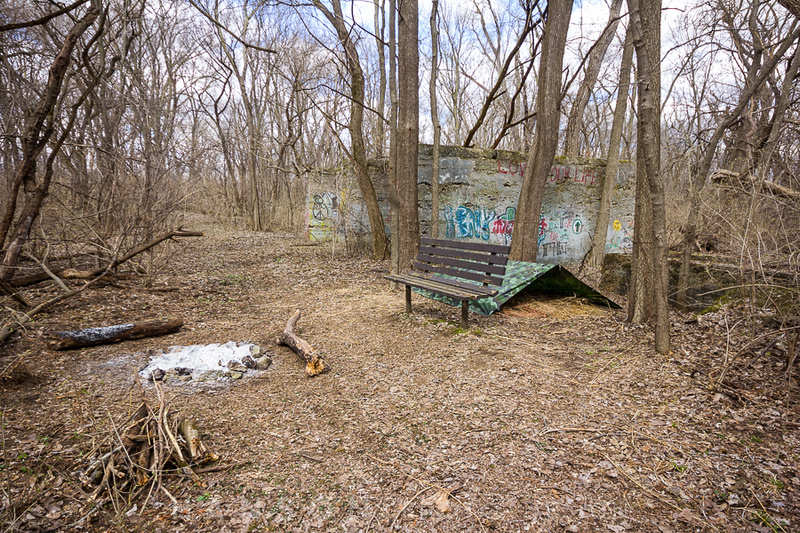 We weren't the only ones on the island that day. Campfire was still warm.

Only a few more signs of activity were noted around the island interior. Mainly two recently used fire rings (one with a stockpile of firewood) and new graffiti on concrete pier ruins.  The amount of visible litter was low and that we did find was faded and probably around before the bridge closure.  We stumbled upon a shattered toilet near an eastern concrete foundation. There always seems to be a broken toilet on Sylvan Island for some reason. 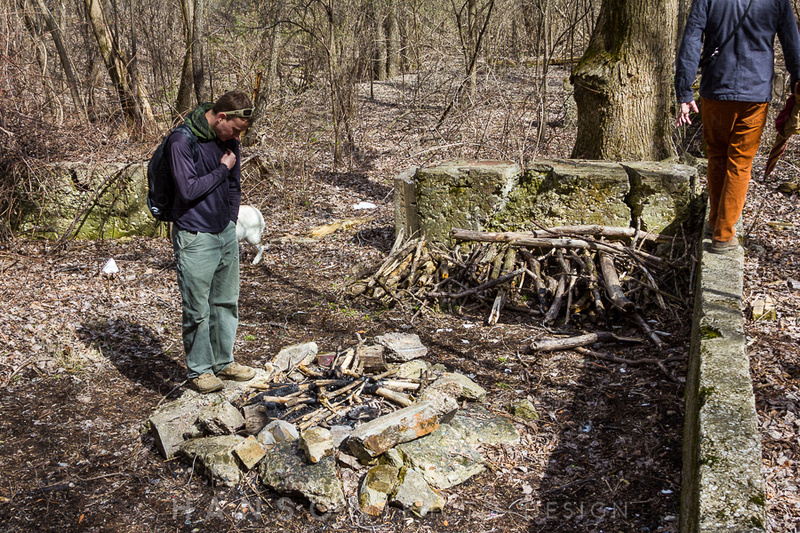 More evidence there are still some people using the island.

Other than these areas, there were minimal signs people had been using the island. No signs of trail use. No disturbed leaves on trails. No attempts to clear downed trees. 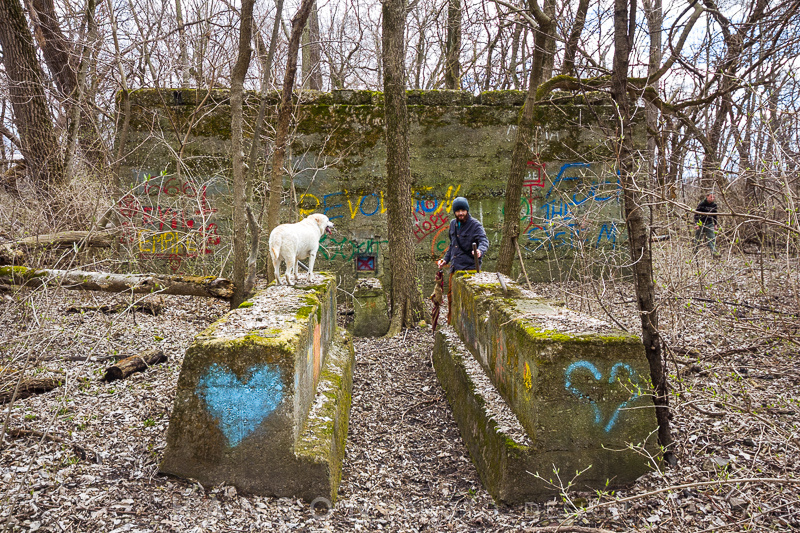 Not much new at the hog chute. Here is a similar photo from back in 2013

In the clearing on the southern edge of the island, sumac plants are starting to make the most of plentiful sunlight.  A few plants were at least 15 feet tall (growing about 5 feet per year?).  Pretty impressive. Maybe they have mutated and found a way to use the islands “special” soil to their advantage. 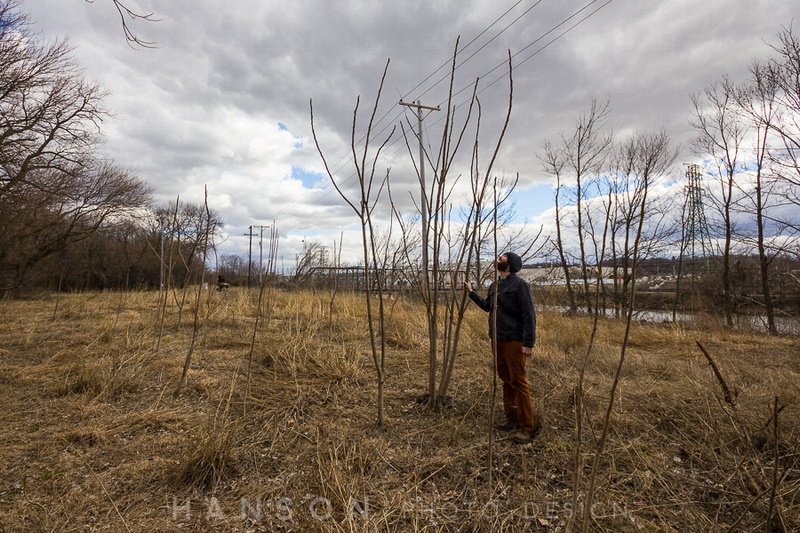 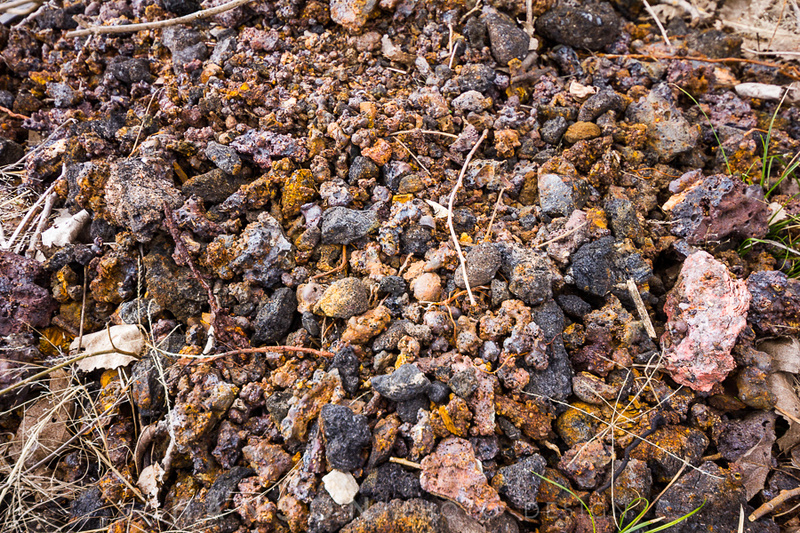 Typical Sylvan Island "dirt." Many areas on the eastern half of the island are littered with slag. This byproduct of steel/iron production was created during the era of the Republic Steel mill.

Benches and tables were shedding paint which added greatly to the abandoned/post-apocalyptic theme.  Other structures were in surprisingly good condition. The entry pavilion, dedication plaque, and FORC bike rack sculpture were in a similar state as when the bridge closed. 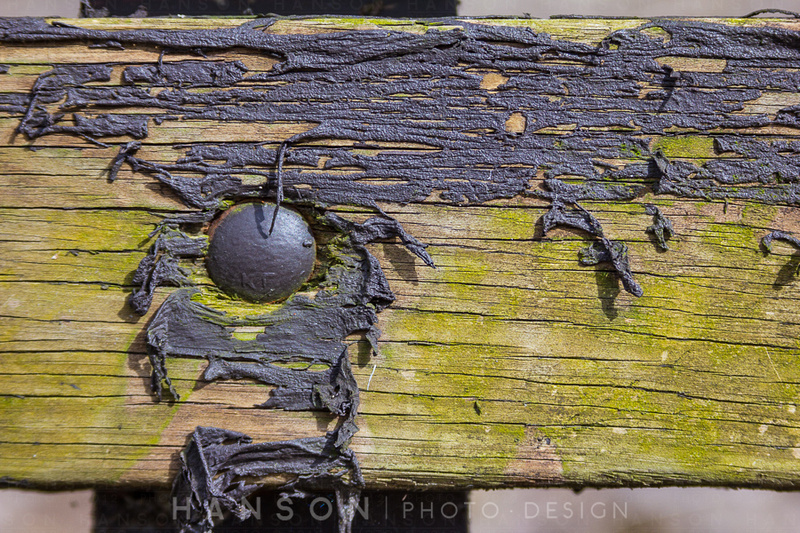 Paint peeling off of a bench. 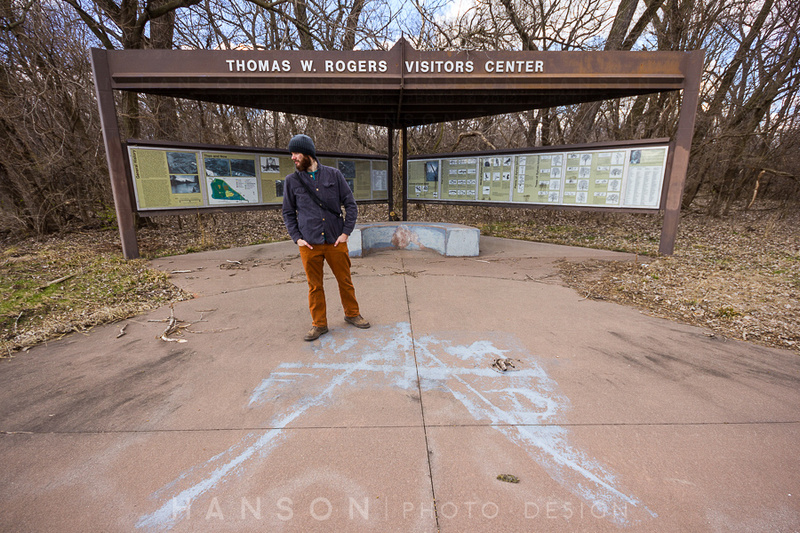 A little more graffiti than before.

Most of the singletrack mountain bike and hiking trails are now completely covered by a thick layer of leaves and largely blocked by fallen trees and branches.  Once the plants begin to leaf out, it would be very difficult to follow/find these old trails.  The main limestone paths were also becoming very difficult to distinguish from the surrounding grasses. 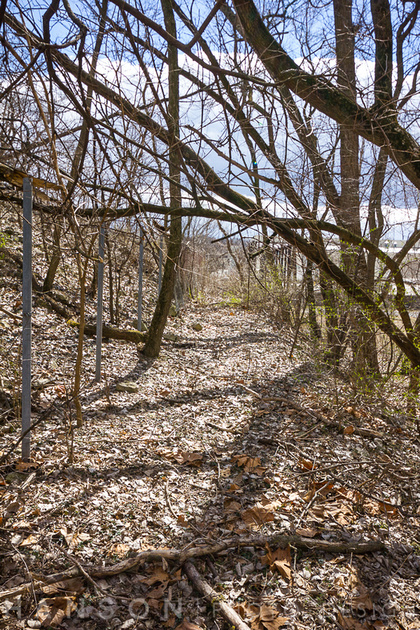 Overgrown trail running along the limestone hill at the east end of the island. 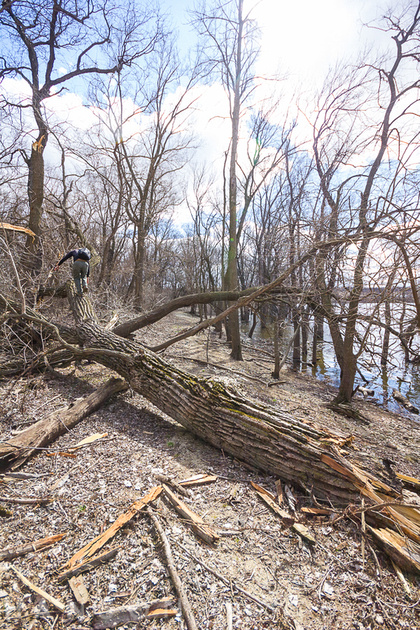 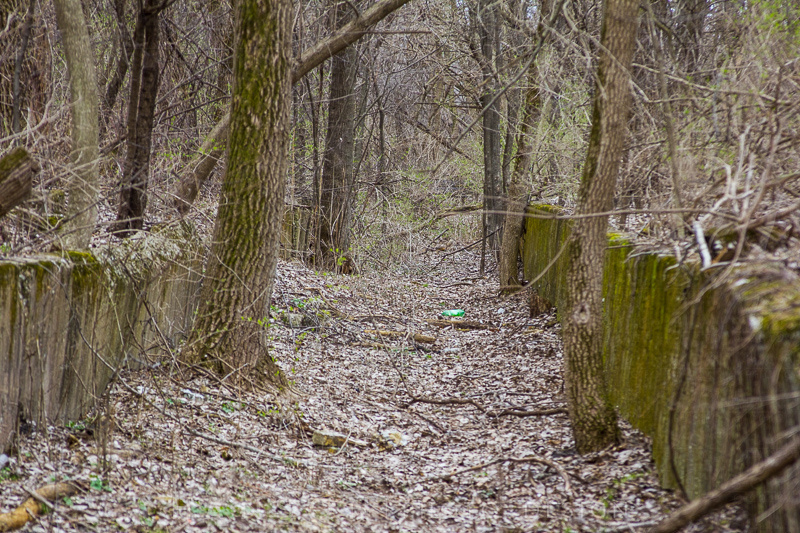 There's a trail there somewhere. 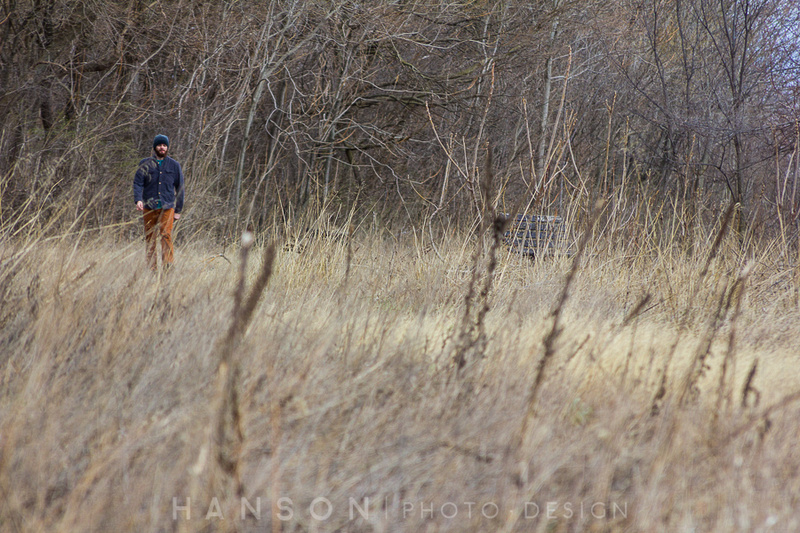 Grasses and larger plants taking over the entrance.

We visited a notable feature on the singletrack trails: the shingle bridge.  It was installed to cross a low spot where flood waters and pooling rain inundated the trails each spring.  The bridge has finally succumbed to the elements. 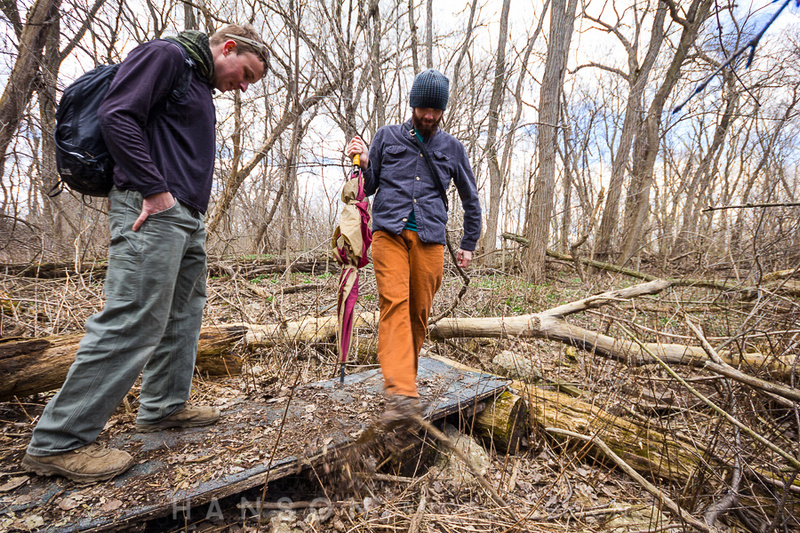 Only one section of the shingle bridge remains in place. 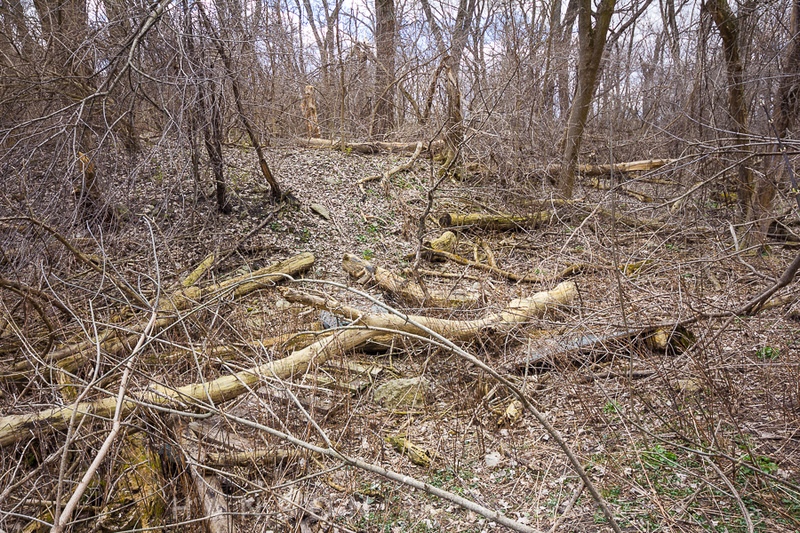 The shingle bridge is no more. Floods and fallen trees have broken it into a few pieces.

Moline is in the process of replacing the ageing bridge and reconnecting the community to the island. They have secured funding for the project but there have been significant delays due to an environmental assessment study involving endangered mussels in the slough below the bridge.  Recent reports state the mussel study is to commence in 2017 and the new bridge may be on track to reopen by 2018.  Judging the condition of the trails at this point, they will take a lot of clearing work to reopen. This may add an additional few of months of wait time for trail users anxious to get back to running, riding, and hiking the singletrack on the island.

On a positive note, it’s clear the community has not forgotten about Sylvan Island.  In the local outdoors community, it’s common to hear people discussing when the old bridge is going to be replaced.  Additionally, there are several local groups with long standing ties to the island.  The Sylvan Island Dreamers, River Action, and Friends of Off-Road Cycling (FORC) all worked to improve the property before access was limited and if anything the bridge closure may serve to strengthen their resolve to further this goal. There will undoubtedly be a large volunteer effort to get the trails reestablished ASAP once the new bridge is completed. 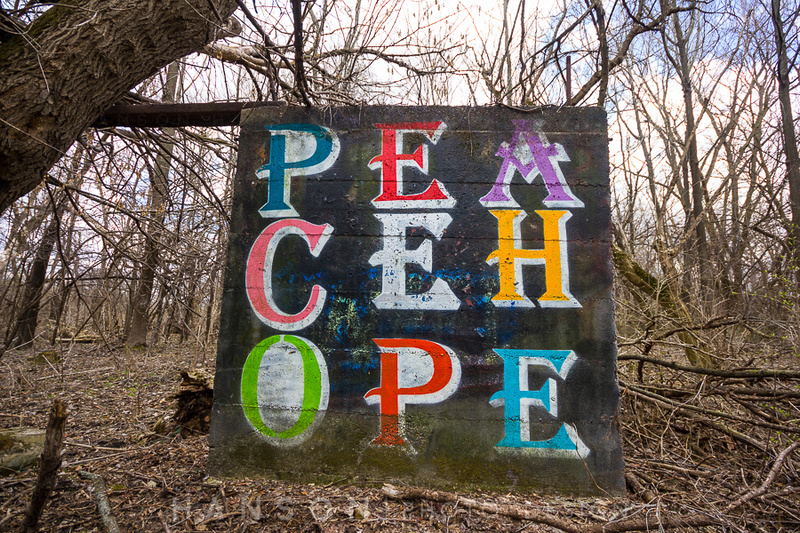 Newer graffiti on one of the concrete ruins towards the east side of the island.

Be sure to check out the rest of the photos by clicking this link.