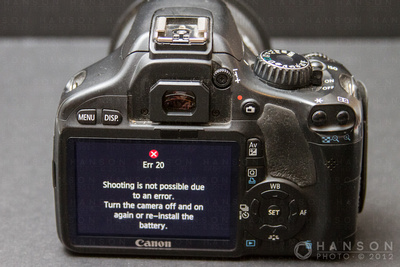 What is the lifespan of the shutter mechanism in a Canon T2i/550D? About 200,000 cycles it appears. (200k is incorrect, it was closer to 137k actuations in this particular case. We didn't have a way to read the count on the camer and tried to estimate based on the file naming scheme of the photos, which was way off.) That was the shutter count at the time ours stopped working.   The published lifecycle for a 7D shutter is 150K cycles and I would reason it to be higher than the 550D.  Not a bad showing for the 550D especially since we didn’t baby it.

I have to assume shutter longevity depends greatly on how heavily the camera is used because of the petite construction of the moving shutter parts (they have to be light because they must move quickly, F=ma, etc.).  This camera saw heavy use.  It was our time lapse workhorse and also spent quite a few hours mounted to a mountain bike shooting HD video over rough terrain.  It even joined in during a few crashes on the bike.  Additionally, it was stuck to a windshield on time lapse duty while driving on rocky roads traveling through Arizona, Nevada, and New Mexico.  A few times the suction cup let go and it bounced around on the dash but it always kept clicking away.

The failure traces back to one of the rivets which held the individual plastic shutter blades to the actuating linkages (photo).  The rivet was pulled through the plastic blade.  This allowed a blade to come loose and move about freely within the shutter housing assembly creating some odd photos.  It didn’t get jammed right away, as is evident in the previous photo, but I kept messing with it until it did.  It didn’t damage anything further, but resulted in an “Err 20” message on the cameras LCD screen and a total lockdown of the camera.  To see all the images from the teardown and repair process check out the gallery: Canon 550D/T2i Teardown & Shutter Repair

The 550D is a good backup camera and we missed having it for the few months we neglected repairing it.  Last week we ordered a replacement shutter box off of EBay which claimed to be an OEM replacement part for $55.  Also for sale was the individual shutter blades which fit into the shutter box ($15 + S&H).  These would have also fixed this particular problem but would have been more work.  The gears and motor in the old shutter assembly didn’t appear to be worn significantly which leads me to believe a set of replacement blades would result in another ~200K 140K actuations.

I repaired the tripod mounting screw on this camera a few months after we purchased it due to one of the before mentioned bike mounted incidents.  Tip: don’t mount this camera with a 1lb wide angle lens to a ¼-20 stud + quick clamp and attach it to the handlebars of a bike!  At least I knew how to get the case off thanks to that experience.

Disclaimer: If you feel uncomfortable taking apart your camera to attempt the following repair, do not proceed.  There are many small fragile parts located under the thin plastic shell that can be easily broken by any and all ham fisted actions.  There is also an electrocution hazard when dealing with the flash capacitor and related circuitry (at least 300VDC). Discharge the capacitor with a resistive load avoiding a direct short circuit because it can damage the camera.  If shocked, it probably won’t kill you, but you will feel pain, probably be burned, and will flail about involuntarily possibly injuring yourself in the process.   There are also components inside which can be damaged by ESD (electrostatic discharge).  Don’t attempt this repair while wearing wool socks during your jazzercise routine on carpet in a dry climate. If you are worried about ESD, wear a grounding bracelet and take the proper precautions when handling sensitive components.

Tools Needed For Disassembly and Repair

All Screws Removed During Disassembly

It is very important to keep detailed notes of what screw/ribbon cable/ connector went where.  If you have the luxury of having multiple cameras, I suggest using the operational camera to document the disassembly process.  Use a notecard with holes punched in it to hold all of the screws removed from the body and number them (see photo to the left).  Label where each screw went and what it was for.  Many screws which have the same head have different lengths, diameters, and thread specifications and it is important to put them back where they belong to ensure there are no interferences or stripped threads.  Tip: when replacing the screws, start threading them into their respective holes counterclockwise (loosening motion) until they engage the existing threads.  This makes them much easier to screw back in and will reduce the potential for stripping the internal threads.

Firstly, remove any lenses, the battery, the CF card, and the neck strap.  Install the protective cover over the lens mounting plate on the camera.

Remove all screws from the outer shell of the camera.  Don’t forget the ones located inside the rubber cover for the USB and HDMI connectors. There are no screws under the rubber grip pieces so don’t peel them off (chances are they are already coming off anyways).  There are also no screws under the pop up flash and it doesn’t need to be raised to remove the top piece of the camera shell.  Remove the battery door and eye cup.  Start to remove the back of the camera first and when it comes loose (be patient and gentle) flip up the locking tab on the LCD ribbon cable connector and remove the ribbon cable.  Remove the front half of the shell next.  To remove the top of the shell, disconnect all the flash lead connectors on the front PCB.  Use caution as the capacitor may still be energized even if the camera has been sitting without the battery in it for hours/days (discharge it with a resistor of a few thousand ohms).  Also disconnect the speaker plug on the back PCB located in the upper left hand corner (two small black and red wires).  There is a black coated fiber optic cable attached to the top shell assembly which sits in a white connector on the PCB underneath the outermost rear PCB.  Make a note of how it looked before disassembly and put it back the same way.  The top should come off without too much effort at this point.

Next, remove all the screws from the back PCB and detach the other ribbon cables.  Some cables snap into their connectors (the ones with a piece of stiff plastic backer material) some are locked into the connector with flip up tabs and others just slide into the connectors.  Pay attention to which type of attachment is used and use tweezers to remove them if you can’t get your fingers to do it.  Remove the PCB and set it aside.  Avoid touching the components and traces on the PCB (hold it by the edges like you would a CD/DVD).

Remove the screws from the aluminum tripod mounting bracket, take it off, and set it aside.  Removing the CMOS sensor assembly takes a bit of planning because it is free floating to allow position adjustment on the X, Y, and Z planes.  Three T-7 Torx screws are used to adjust the "levelness" of the sensor and will affect image sharpness if not replaced in the correct way.  Firstly, tighten one of these torx screws while making  note of how many rotations it takes to become snug.  Write down the number of turns (in 1/4 turn increments) and the location of the screw being tightened. Repeat this for all three screws and remove them all.  Next remove the two fat head Philips screws holding the thin metal tabs connected to the sensor assembly in place.  Place the sensor unit where it will not be exposed to dust (inside a clean plastic container with a lid is a good place).  When reinstalling the sensor assembly, install all three torx screws to the snug position and back them off the number of turns written down previously. If you somehow mess up this step there is still hope.  Check out this article on how to recalibrate the sensor location at the Digital Cannon repair Blog.

Remove the aluminum frame under the sensor assembly (can be a bit tricky because of the nearby ribbon cables).  Next, take off the prism and viewfinder assembly.  The shutter assembly should now be fully exposed.  Detach the power connector for the shutter motor on the front PCB (red and black wires with white connector) and detach the torsion spring from the mirror linkage (don’t forget to reattach this during reassembly).  De-solder the power leads from the old unit and reattach them to the new shutter motor (respect polarity!).  Don’t apply too much heat to the motor contacts (be quick) or you will melt the surrounding plastic and insulation on the tiny wires.

Now is the time to clean any optical surfaces (mirrors, sensor shield, focus screen, etc.) which may have become contaminated by fingerprints or dust using the lint free wipes with residue free cleaner.  Take care during reassembly not to get them dirty again.

If everything went well, the camera should now be functioning and you have possibly saved hundreds of dollars by doing it yourself.  This repair took two hours to complete (including detailed notes and photography).  I imagine it would have taken 1-1.5 hours without this additional step.

Mirror in the Up Position

How much did we save?  I don’t exactly know, but the amount of time to get it repaired can be cut almost in half (~1 week for parts delivery vs. ~2 weeks for Canon’s service from my experiences).  I would love to hear from you if you have had this same problem fixed professionally. How much did it cost and how long did it take? I have heard rumors it is upwards of $300 to get this repaired or about half the cost of a brand new 550D body.

Update (8/21/13):  I have been using this camera for the last year with one unusual side effect which is probably the result of this repair.  At higher shutter speeds > 1/2000s, the images come out ~1 stop underexposed.  My guess is that the shutter box needs to be re-calibrated to work within the range of these shutter speeds.  Looking into the problem a bit further, proprietary software is required to change this setting which is much too expensive to justify worrying about it. I rarely use these fast shutter speeds and it doesn't seem to have any affect on exposure at other shutter speeds.

jim(non-registered)
I want to thank you for placing clear directions for replacing the shutter assembly on the net. I have had my t2i for about 6 years and taken about 60k+ photographs with it. It died of this affliction this month on an outdoor shoot. I am comforted by the information you have so graciously provided that I have made the right decision to buy another camera body. Someday, when I am feeling brave enough to tackle the repair, I will give it a shot. Thanks again for helping.
Hanson | Photo • Design
In the article I go over how to adjust the sensor position and include a link to an external site which explains how to do it mechanically. Fourth paragraph from the bottom of the article. Glad you found the photos helpful!
ColT(non-registered)
Hi,

How do you adjust the sensor position? It has been adjusted by springs, and theoretically it needed to be adjusted by a service software.